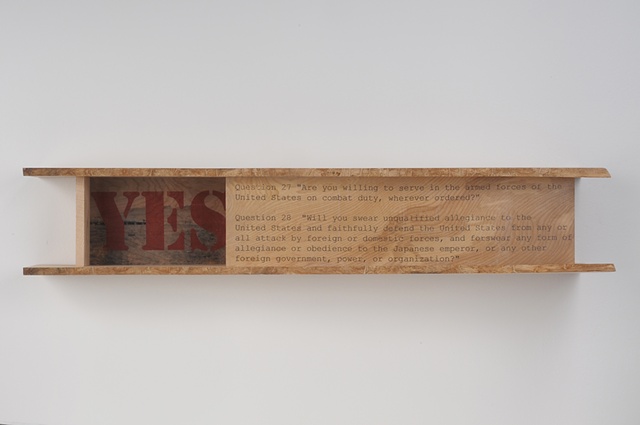 A Question of Loyalty

"A Question of Loyalty"

Tule Lake was one of ten Japanese American Internment camps - and one of two that were in California (the other is Manzanar). Among the Japanese Americans interned at Tule Lake were internees from other camps who refused to take a vow of undivided loyalty to the U.S. and were sent to this "Segregation Camp," or had given answers on the loyalty questionnaire that suggested they were untrustworthy or security risks. As a result, it had the highest level of security of any of the camps. At the beginning of the internment, Japanese Americans and resident aliens of Japanese descent were given a questionnaire to determine their loyalty to the United States.

Question 27 on the questionnaire asked, "Are you willing to serve in the armed forces of the United States on combat duty, wherever ordered?" while question 28 asked, "Will you swear unqualified allegiance to the United States and faithfully defend the United States from any or all attack by foreign or domestic forces, and forswear any form of allegiance or obedience to the Japanese emperor, or any other foreign government, power, or organization?"

A number of those who were sent to Tule Lake had found the loyalty oath's questions confusing, while others, certain that they were to be deported to Japan no matter how they had answered, feared that answering the questions in the affirmative would cause them to be seen as enemy aliens by the Japanese. Others chose to answer "no" to both questions in protest of their imprisonment.

Some of the Tule Lake internees had participated in demonstrations against the internment policy at other camps. Many residents had renounced their U.S. citizenship, often due to deception or coercion. Most of the Tule Lake renunciants later had their citizenship restored, largely through the vigorous efforts of civil rights attorney Wayne M. Collins.

My piece, "A Question of Loyalty" addresses the fact that whether you answered "Yes" to either of these questions still meant the same outcome. You stayed in camp. If you were a "No-No" boy, then you went to Tule Lake.