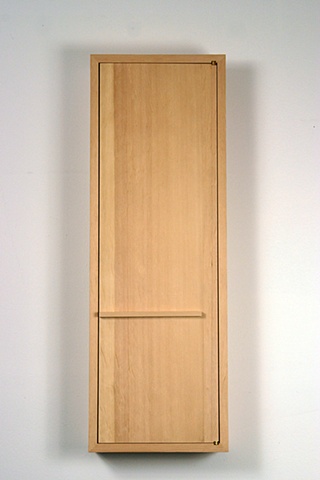 "ID" is one of several works that focuses on the evacuation of Japanese Americans from San Diego and Chula Vista and has taken the form of a "Butsudan"*.

I have re-created over 1000 ID tags (See "Cascade") that were distributed at assembly centers - each individual, including babies and children were issued a tag, which indicated a serial number and directed them to specific camps.

The tags in this piece, "ID" were made all interned individuals from Chula Vista, my hometown, under the age of 10. Most of the people named in these tags are friends of my parents and spent four years of their childhood in the camps. Although my friend Mira Nakashima was interned out of the Seattle area, her tag in this piece as well: she was one years old when she and her family were sent to Minidoka.

*butsudan: a shrine found in religious temples and homes of Japanese and other Buddhist cultures. A butsudan is a wooden cabinet with doors that enclose and protect a religious icon, typically a statue or a mandala scroll. The doors are opened to display the icon during religious observances. A butsudan usually contains subsidiary religious items called "butsugu," such as candlesticks, incense burners, bells, and platforms for placing offerings. Some buddhist sects place "ihai", memorial tablets for deceased relatives, within or near the butsudan.