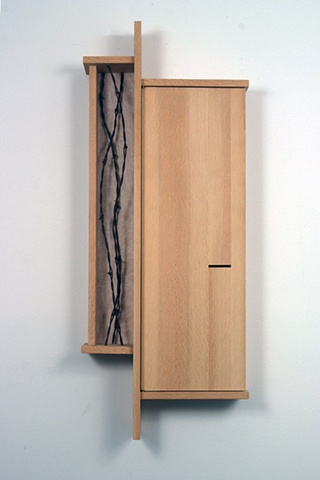 The Poston War Relocation Center, located in Yuma County (now in La Paz County) of Arizona, was the largest of the ten American concentration camps operated by the War Relocation Authority during World War II.

The Center was composed of three separate camps arranged in a chain from north to south at a distance of three miles from each other. Internees named the camps Roasten, Toastin, and Dustin, based on their desert locations. The Colorado River was approximately 3 miles (4.8 km) to the west, outside of the camp perimeter.

Poston was built on the Colorado River Indian Reservation, over the objections of the Tribal Council, who refused to be a part of doing to others what had been done to their tribe. However, officials of the Bureau of Indian Affairs overrode the Council, seeing the opportunity to bring in improvements and develop agricultural land on the War Department budget and with thousands of "volunteers," which would remain after the war and aid the Reservation's permanent population.

The combined peak population of the Poston camps was over 17,000, mostly from Southern California.

A single fence surrounded all three camps, though Poston II and III did not have gatehouses. The thousands of internees and staff passed through the barbed-wire perimeter at Poston I, which was where the main administration center was located.

Poston was a subject of a sociological research by Alexander H. Leighton, published in his 1945 book, The Governing of Men. As Time Magazine wrote, "After fifteen months at Arizona's vast Poston Relocation Center as a social analyst, Commander Leighton concluded that many an American simply fails to remember that U.S. Japanese are human beings."