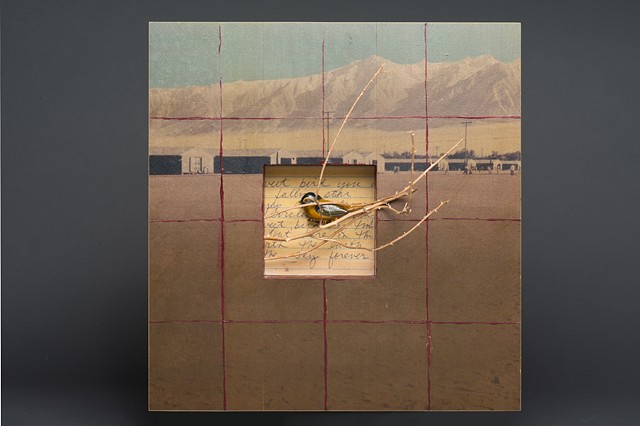 The small handcarved bird that is embedded in the piece was made in 1942-45 by an unknown Japanese American who was incarcerated in the prisoner camp called Minidoka, which was located in Idaho.

Bird pins were made of scrap lumber that was found in the camps as well as wire that was used to cover barrack windows. The artists used images of birds found in old copies of National Geographic magazines as their models. The beautiful pins seem to belie the circumstances under which they were created and exemplify the definition of gaman: enduring the seemingly unbearable with patience and dignity.

Summary: In February of 1942, Executive Order 9066 was signed by the president of the USA and forced the removal of people of Japanese Ancestry living along the West Coast of the United States. A "border" was established and it was declared that any Japanese Americans living West of this border had to be removed to remote and hastily built prison camps.