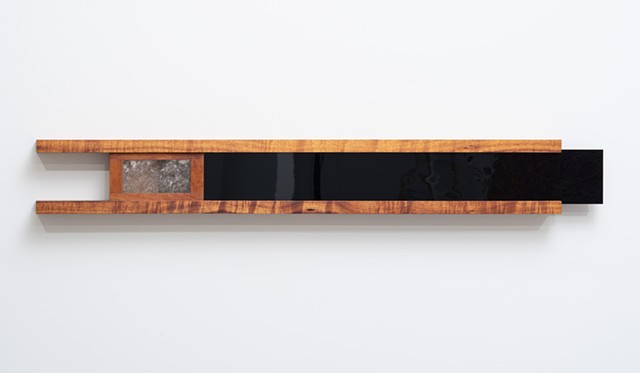 "untitled" was made for an exhibition that pairs artists with scientists, specifically honoring the endowed chairs for working biological researchers made possible by partial matches from the Jacobs family. Ten of the research scientists currently holding such chaired positions were paired with San Diego artists to create new works informed by the research and work of the scientist — specifically human existence. I was paired with Dr. John Reynolds, a Salk Institute scientist whose work focuses on visual cognition — vision itself, neural mechanisms of visual attention. He and his team recently have begun working on aging and age-related brain disorders by working with a core group of marmosets, a small primate species, and following them through their life cycles and testing them with cognitive ‘games’ and storing and reviewing routine brain scans as they age.

It was a fitting match as I have a very close aunt who was diagnosed with dementia right around the same time that this exhibition proposal was presented: my immediate response to John’s study is a more emotive response to this disease as related to what I am going through with my aunt and my observations of what is going on with her as she declines.

Local artists and Salk Institute for Biological Studies scientists collaborate in this interdisciplinary project that was inspired by the visionary gift of the Jacobs family.

The Joan Klein and Irwin Mark Jacobs Senior Scientist Endowed Chair Challenge began in 2008 to encourage donors to establish endowed chairs in support of Salk scientists for their outstanding contributions to biological research. For every $2 million in donor contributions toward a chair, the Jacobs added $1 million to achieve the $3 million required for a full endowment, and the Jacobs Challenge is responsible for 18 of the 31 chaired positions to date.

Ten San Diego artists explored the curiosities of research practiced by these endowed-chair Salk scientists, and the resulting new artwork they created is the subject of this exhibition.

Presented coincidentally in the wake of the pandemic, and during the recovery from its affects, this project focuses attention on scientific discoveries in biology vital to human existence, the patrons whose support is foundational to this important research, and the artists who bring expression and insight to both. The juxtaposition of contemporary art and biological research aspires to engage the broader public in dialogue and a renewed appreciation for creativity, science, and philanthropy. Curated by Chi Essary. Major funding for this project generously provided by the Ray Thomas Edwards Foundation with additional support from Weston Anson and ArtWorks San Diego. Institutional support provided by the City of San Diego Commission for Arts and Culture and by the Members of the La Jolla Historical Society. The Society is immensely grateful to the Salk Institute for Biological Studies for their support and participation in this project.